It just never ends. No matter how much publicity these scams get, no matter how many years old the internet is, people still hand over their money to scammers.

It doesn’t matter how old you are; last year, in fact, more consumers age 20 to 29 reported losing money to fraud than the over-70 crowd did.

It doesn’t matter how powerful or educated you are, either. Just ask Hillary Clinton campaign manager John Podesta, who exposed the campaign’s email stash by falling for a phishing scam.

Hackers stole $172 billion from consumers in 20 countries in 2017, according to Norton;  2.7 million Americans reported some form of fraud to the Federal Trade Commission. (Top states: Florida, Georgia, and Nevada.)

Most internet scams are fundamentally the same. They prey on one of two human weaknesses:

Here’s a shocker: Not everything you read on the internet is true. And so, for your own entertainment and education, here they are: 9 internet scams we’re still falling for. 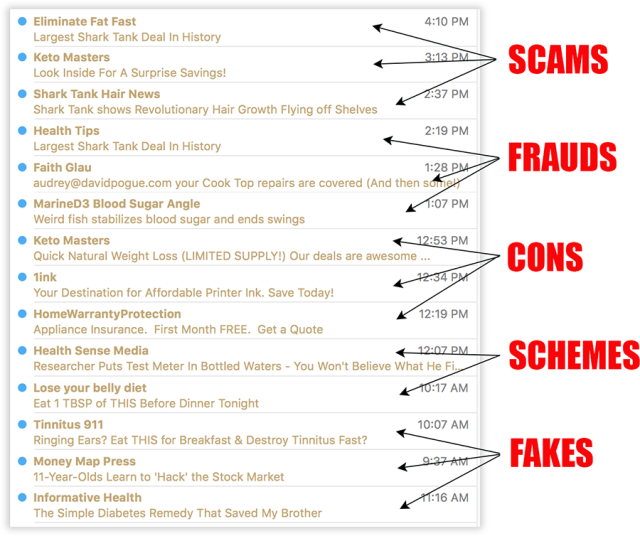 Why is it getting worse? Scammers are making their phishing attempts seem more plausible to suckers like us by addressing their scams to specific people and making it look like emails come from a trustworthy source — a more targeted approach known as spear phishing.

You get an email or a text message from Apple (or DropBox, Microsoft, Google, your bank, Amazon, eBay, PayPal, Yahoo, etc.) saying that there’s a problem with your account. Or the come-on might be a “Delivery Issue,” “Parking Ticket,” “Canceled Transaction,” or “Refund for Purchase.”

You’re encouraged to click the link to pursue the issue —“or else your account will be suspended!”